CLAY: One of the things that happened today, which I feel like is kind of flying under the radar, is the federal government extended the mask mandate into March. Not really a surprise because we’ve all gotten used to it. But that means that we are now two years since “15 days to stop the spread” with mask mandates still existing.

I want to play this cut from Dr. Fauci talking about fully vaccinated Americans with a booster still need to wear a mask — which, of course, is the exact opposite of what we were told in May when they ended the mask mandate for a very short relatively period of time before reinstituting it. But I want to ask Buck, does this ever end? As we look ahead, are we talking about decades of wearing masks on airplanes?

Are we ever going to be able to dial it back? Because I’ve got a couple of clips that I want to play. First, Anthony Fauci, number 8: Fully vaccinated Americans with a booster still need to wear mask. This has been extended until March for everybody traveling during spring break, all those things. The mask mandate is not going to go away. Play cut 8.

FAUCI: We’re asking people to go get the booster shot, and the question just asked is very relevant. What you do is exactly what we were saying, and that is to be prudent and careful, and one of the things that’s very clear is that if you have to be in an indoor congregate setting in which you’re unsure of what the vaccination status is of the people around you, wear a mask.

CLAY: Okay. So does it ever end? If that’s the standard, I don’t understand how we ever get away from wearing masks.

BUCK: Why only one mask? I know it points to the absurdity of all this. But we were told almost exactly a year ago, I think it was in January, that Fauci came out saying for an extra level of protection, two masks. Then you started seeing all these Democrats showing up looking like morons with two masks on. People just say, “Why, it just makes sense!”

All right, let’s do three. Let’s do three. When is it too crazy, libs? That’s the question we’re always forced to ask: When is it too much? When have you turned into the kid who shows up for recess to play kick ball with a helmet and shoulder pads and a first aid kit on your backpack and a mouth guard? When are you that kid?

I think the problem is Democrats not only have been that — a lot of them for a long time, the Fauciites — this has become so politically polarized it’s amazing, isn’t it? Everyone I know who is a Democrat in media is a Fauciite believer. How is this possible? Not everyone I know who is a Republican, by the way (or conservative) has been super critical of Fauci and super against him.

There’s actually more variation among this stuff on the right, in my experience, my own dealing with people talking with people. Every Democrat I know thinks Fauci is great. How is that possible? We talk about the metrics that Biden set up whereby if over 200,000 Americans die in a president’s watch, clearly that president’s bad.

Well, I think it’s over 300,000 now died under Joe Biden’s watch. And he has a vaccine we’ve all been told we must take or you’re a bad person. It’s not… Let’s be very clear: It’s not “take the vaccine just,” comma, “for your own health.” It’s “take the vaccine or you’re reckless and you’re putting people at risk!” That’s the message from the Democrats. Now, of course, it’s “take the booster.”

You asked when it ends. It ends when enough people are finally, I think, so beaten down and are so sick of walking around like they’re living in this Soviet Union, and they’re approving of and agreeing with publicly the grain-harvest numbers when they know they’re fake, but they feel like they have no choice. When their spirit is finally so broken from that that they don’t care anymore, they’ll stop double masking outside and they’ll say, “You know what? This is my seventh booster shot, Clay. I think I’m good.” That’s I think when it finally goes away.

CLAY: I think it’s going to take an ass kicking in the midterms.

CLAY: That’s the only way that I can see it because, listen, there are a lot of people you’re talking about in the media. Did you hear this this morning on CNBC, Andrew Ross Sorkin on CNBC, who is supposed to be a rational person?

CLAY: But he is supposed to be rational, at least on CNBC. We played Jim Cramer who lost his mind talking about the necessity of the military. He wanted the military forcing mandates on everybody and putting them into locked homes. Listen to this argument with Congressman Mike Garcia. He starts screaming, “You don’t have the right to kill my mother!” Live on CNBC. Listen to this outrageous clip. 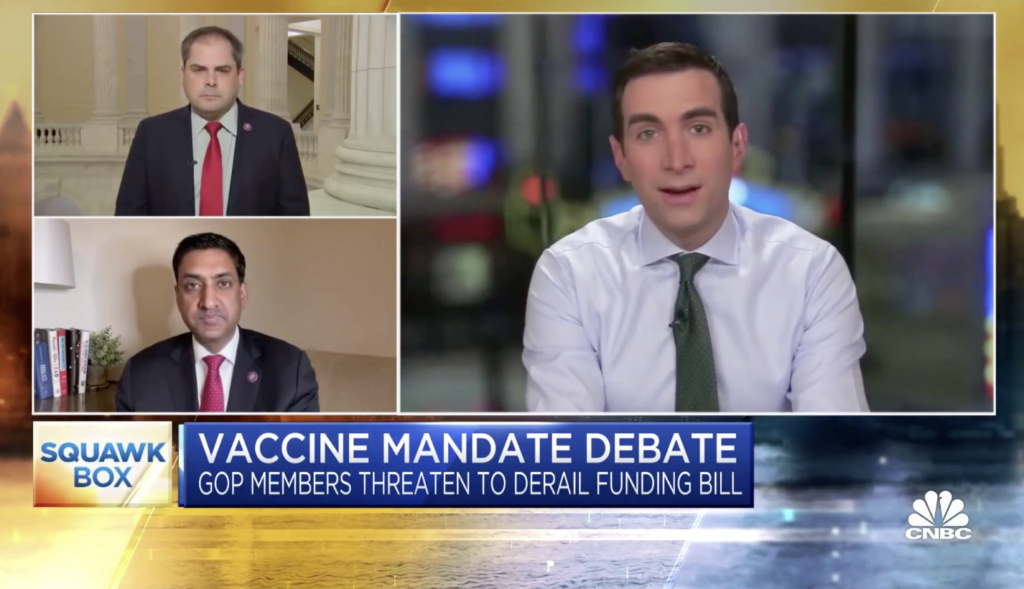 SORKIN: If we could get everybody vaccinated, uh… (sputters) I don’t want to say it’s a panacea, but it would be a lot better. And there’s nothing in the Constitution (huff) that says that you have the right (huff) to give me covid or anything else, and so I don’t understand this argument about freedoms. And on the other side of it, we’re going to pay for it anyway. More than 40% of Americans are effectively insured by the government. Taxpayers — Medicare, Medicaid — are paying for all this. So (sputtering) there’s — there’s an actual health care costs, and there’s an economic cost. So I’m not sure… (sputtering) I don’t understand why you wouldn’t want to advocate.

GARCIA: Let’s remember, the Constitution does still exist. Despite the headwinds we’ve had in the last two years and encroachments on the Constitution it still does exist, so that we do have rights. It’s the First Amendment, the Tenth Amendment protecting us against federal mandates like this, the 14th Amendment.

GARCIA: I’m not killing your mother.

BUCK: By the way, that’s where we are. That’s where we are. That was the critical thing: “I’m not killing your mother.” People need to get a grip. You can’t start walking around saying that human beings involved in breathing are a risk to everybody. You walk around and act like everybody you come into contact with has covid. First of all, it’s not true. So a lot of people that are they’re harassing, they’re sticking with needles, they’re quarantining, doing all this stuff.

BUCK: Exactly. Cold and flu season. Now that’s interesting as well because people can get a cold if they’re much older. Now, I understand. Covid is more dangerous. But if we’re going to take the standard of the cold and flu is something that we could accept as a society in the past, but we can’t accept any risk at all of people having covid, I would want to know why.

This is the original argument. Remember the very early days of covid. We say 40,000 to 80,000 people a year, in America, die from the flu. We’ve never done any of this masking stuff. There have been shots, by the way. I’m not opposed to vaccines! I’m not opposed to people — neither are you — getting shots. Your parents, my parents. I got a shot. I’m not getting another one.

Treating it like flu would have made sense, especially now that we have a vaccine, but they don’t want to do that. They treat it like it’s something else, Clay, and that’s why you asked, “When does it end?” You say in the midterm. I don’t know. Because the midterms, you’re still going to have California and New York. And they’re going to double down on how they’re the safe places, they’re the science places. They’ve lost their minds. I’m here in New York; people are crazy here.

CLAY: I wish the Congressman had the opportunity. He said, “I’m not killing your mother,” but when somebody is making such an irrational, emotional argument, “you don’t have the right to kill my mom,” usually it’s the grandmother. “You’re killing grandmothers! You don’t care!” Look, the response rationally to that is, your grandmother or your mother should get vaccinated if you have great fear of covid.

And they should also get boosters, and they are welcome to wear masks and limit their social encounters with others. That’s all well within their right. If they are neurotic and they are particularly afraid of covid, that’s all in their rights. But your fears don’t cancel out my freedoms, and they certainly don’t cancel out the Constitution, Buck, and the more important issue here is this illusion that is being sold that if everybody were vaccinated covid would go way isn’t true.

Now, the studies reflect that your odds of being hospitalized or dying yourself are lower. But in terms of actually spreading the virus, the implicit “you’re killing my mother/you’re killing my grandmother” argument that Andrew Ross Sorkin is trying to make on CNBC is fundamentally not true. And the reason why I say, “It’s CNBC and I’m upset by it” is theoretically if you’re a financial analyst, you should have some knowledge of data and numbers and you should be more rational than all these idiots running around on social media who are just using emotion all the time.

BUCK: I’m looking right now at the provisional U.S. covid death count by age, and it’s up on Statista, and it’s what we’ve said all along. Effectively, this is a virus, if you are under the age of 50 — doing fast math here — there are about 45,000 to 50,000 people in the country, they think, who have died from covid, over 50.

CLAY: The people under the age of 50, too, because most people don’t die. The population is way higher, in addition to that being a small number.

CLAY: If you’re a senior citizen, you should get the vaccine.

BUCK: It’s a senior citizen plague. It’s going after our seniors. That’s why we’ve been saying, “Get vaccinated if you’re in that age range, please,” and we also tell you the data about the people going in the hospital in Michigan. Yeah, maybe 25% of them are vaccinated and still in the hospital, which is noteworthy because it’s not obviously a vaccine that’s as good as we were told it is. But it’s still much better than the alternative if you’re in that high-risk category.

And that’s why we tell you that 75% of the people… I can understand if you’re working in the emergency room right now in Detroit and you’re seeing somebody who is coming in who is 64-65 years old, they’ve got hypertension and they’re unvaccinated. You want everyone who would be in that category to take the additional precaution.

Someone who is 30, someone who is 40, someone who is 10, what are they doing, Clay? This is where you ask me where it goes. I thought at this point that enough Americans would be rational, but part of the problem here, man, is we’re in an era of mass media and mass hysteria. You combine these two things and people are just…

They’re all carrying around their covid panic meters on their phones. They’re watching. They’re reading. They’re seeing all this stuff all the time. There’s no escape from it. That’s how people are double masking alone outside. But we’re going to be with you through it, folks. It might be a rough winter, but we’ll be with you every day.

CLAY: That’s how you end up on television screaming that someone’s trying to kill your mom. It’s a form of madness.

About The Clay Travis and Buck Sexton Show